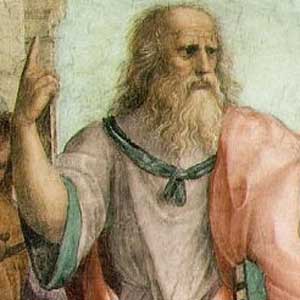 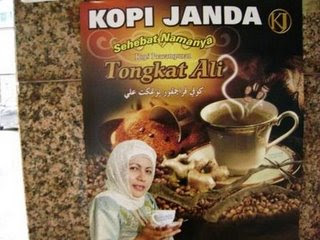 Kak Eton, the sultry Janda from Kampung Pinang Sebatang, hears that a certain church in the city, in their infinite kindness of heart (with nary a hidden agenda in mind, mind you! And Amy Winehouse was a virgin too) gives out money ... lots of them... to certain selected jandas and ibu tunggals from the malay-muslim population in Malaysia. (Mention of Kak Eton firstly appeared in our previous posting about both Joe Bedul's and Joe Labi's luscious conversation concerning her, after their brief hiatus on the De-Evolutionary discussions therein). All the jandas need to do, of course, were to just come over to the church, sing some few songs, praise the Lord, fill in some forms, drink in some queer-looking water and, finally, take a quiz. Now it so happens that Kak Eton is a quiz freak. She likes taking them, and is always on the lookout for challenging things like this. But this one turns out to be different. She answered most of them, and, upon checking back at home for the true answers, she found out that each and every single answer she gave was wrong! 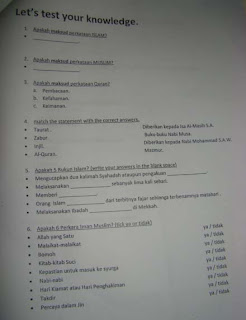 Let's have a look at the church quiz and Kak Eton's answers:-
Quiz 1. The following is the description of a certain personality of old. Please guess what the name of this personality is:-
·       He is “God made flesh”, the saviour and "Son of God."
·       He has God as his father and a mortal Virgin as his mother.
·       He was born in a humble cowshed on December 25 before three Shepherds.
·       He offers his followers the chance to be born again through the rites of baptism by water.
·       He miraculously turns water into wine at a marriage ceremony.
·       He rides triumphantly into town on a donkey while people wave palm leaves to honor him.
·       He dies at Eastertime as a sacrifice for the sins of the world.
·       After his death he descends to hell, then on the third day he rises from the dead and ascends to heaven in glory.
·       His followers await his return as the judge during the Last Days.
·       His death and resurrection are celebrated by a ritual meal of bread and wine, which symbolizes his body and blood.
Kak Eton ddid not answer this one at all. She had suspected that the quizmakers had wanted her to answer "Jesus" but upon doing more research,  particularly the book by Timothy Freke and Peter Gandy (google!) The true answer is “Dionysius”.  She also read therein from where the false notions of Trinity, Sonhood, and other zany dogmas as admonished by the Qur’an, originated from!
Quiz 2. Which of the following personalities are said to have been crucified on the cross?
A.     Ixion
B.     Quetzlcoatl
C.     Jesus
D.     Krishna
E.     All of the above
To appease the quizmasters, she had planned to answer "C" but apparently the correct answer is E, all of the above! 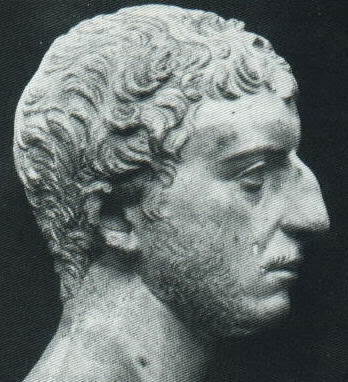 Quiz 3. Josephus was a well-known historian during the time of Jesus Christ, and people often quote him to prove that Jesus was a historical figure. Who was Jesus according to Josephus?...
A.     A high priest whose father’s name was Damneus.
B.     Son of Saphat, head of a band of thieves
C.     Son of Sapphias, Governor of Tiberius
D.     Son of Thabet, a priest wannabe
E.     Son of a guy called Josedek
F.     Son of a guy called Gamala
G.     Son of Threbutus the priest
H.     Son of Gamaliel, a priest
I.      Son of Ananus, a priest
J.      A Priest after Ananus
K.     Son of Mary
Kak Eton quickly chose "K" for this one. But in fact, the correct answer is: All of the above except K! Kak Eton finds out that the Jesus Son of Mary quote by Josephus was inserted somewhere during the Middle Ages and was not present there before. This lead Kak Eton to conclude that that Jesus was a persona-non-grata, else Josephus would have mentioned him.
Quiz 4. Before his ministry, Jesus was a ...
A.     Farmer
B.     Systems Analyst
C.     3rd downline Multi-Level Marketing Afficionado
D.     Carpenter
E.     Stone Builder
Kak Eton confidently answered Carpenter, whereas the correct answer is E: Stonebuilder. The original “Naggara” means “Master Builder” or “Stone Mason”, and through numerous transliterations and revisions later, things just got lost in translation and they thus ended up with a most divine woodworker. Kak Eton wonders suspiciously what else could be mistakenly translated: If one could change on one’s job description, what’s so difficult for other people to confer some Godhood to you?
Quiz 5. God's house of worship is for God's children, and whomsoever wishes can enter it to pray to God. However, the following person (s) are NOT allowed to enter the House of God, according to the Judeo-Christian beliefs:-
A.     A flat-nosed and /or handicapped person
B.     A man whose testicles had been damaged  and penis had been cut off
C.     One whose Mom and Dad didn't get married when he was born
D.     One whose grandfather, or grandfathers up to 10 generations, didn't get married
E.     A Serial Killer
Kak Eton finds this question ridiculously easy and puts E as the answer. But upon study, she finds that the answer is All of the Above EXCEPT E! Well, it says so in the bible!
Quiz 6. It says in the bible that Solomon built a relatively small chapel for the Israelites. Now the Statue of Liberty, which is 7 times higher than this temple, needed 212 men built. The Hoover Dam, 14 times longer than this temple, required about 16,000 people to build and Taj Mahal which is 20 times wider  than this temple, utilised 22,000 people. How many people were required to build Solomon's temple?
A.     1
B.     15
C.     150
D.     15,000
E.     150,000
If it were up to Kak Eton, she would just get Pak Mat the retired mandore, fire up 20 to 30 Indonesian workers in between jobs with some 5 ringgit per hour kerja kontrek and unlimited supply of Gudang Garam and within less than two months could get some structure up and running. So she got generous and put "C" for this one. The real answer is E.
Quiz 7. What are the marks of a good Christian?
A.     If someone hits you, invite him to do it again
B.     If someone steals from you, offer him something additional
C.     If someone wants to borrow from you, do not turn him down
D.     When you loan something out, do not ask for it back
E.     All of the above
Kak Eton had some trouble on this one, so she left it blank and found out later that the answer is E: all of the above. The bible says so.
Quiz 8. Joharam was a biblical king who ruled for 8 years beginning when he was 32 and died at the age of 40. Immediately after this, his youngest son Ahaziah took over the mantle of Kingship. How old is Ahaziah when he became king?
A.     2
B.     12
C.     22
D.     32
E.     42
How dumb can a question get, Kak Eton thought. And starting from the process of elimination, she striked out E. And then, logically, D. She striked out A and B as insensible, and chose C as the answer, only to be jolted out of her sanity when the bible tells that the answer is E. This makes Ahaziah the only person in the entire Universe who is 2 years older than his father!
Quiz 9. Did Apostle Paul perform any baptism?
A.     Absolutely Not! He said so himself
B.     Nobody except Crispus and Gaius
C.     Stephanus and his entire family
D.     Paul is not quite sure
E.     Paul really can't remember
Kak Eton loses interest by the time she gets to this one, but answered A anyway, cos it sounded convincing. The correct answer turns out to be: All of them!
Quiz 10. Elisha was a biblical man of God, but a little bit balding. Once, when he was walking along a road in Bethel, a few cheeky boys made fun of his balding head. As a result of this,
A.     Elisha commanded their parents to stop their week's ration of candies.
B.     The boys were spanked and made to promise to respect old people
C.     They were made to write "I must not mock bald people ever again" 100 times on a stone tablet
D.     They had stay vigil at night for 3 days in the temple
E.     They were punished by God sending 2 bears come out of the woods and tore up all 42 of the boys.
Kak Eton would have chosen "B" if Balqis, her daughter, were to do the same. She chose "D" for her answer, only to find out that the bible says it was "E". That's the Loving God of the christians there for you. 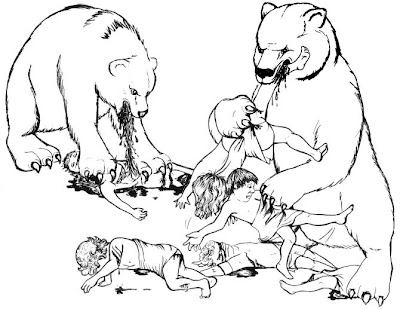 Posted by TheCorruptiouslyObnoxiousSumanSumbing at 02:39 4 comments: